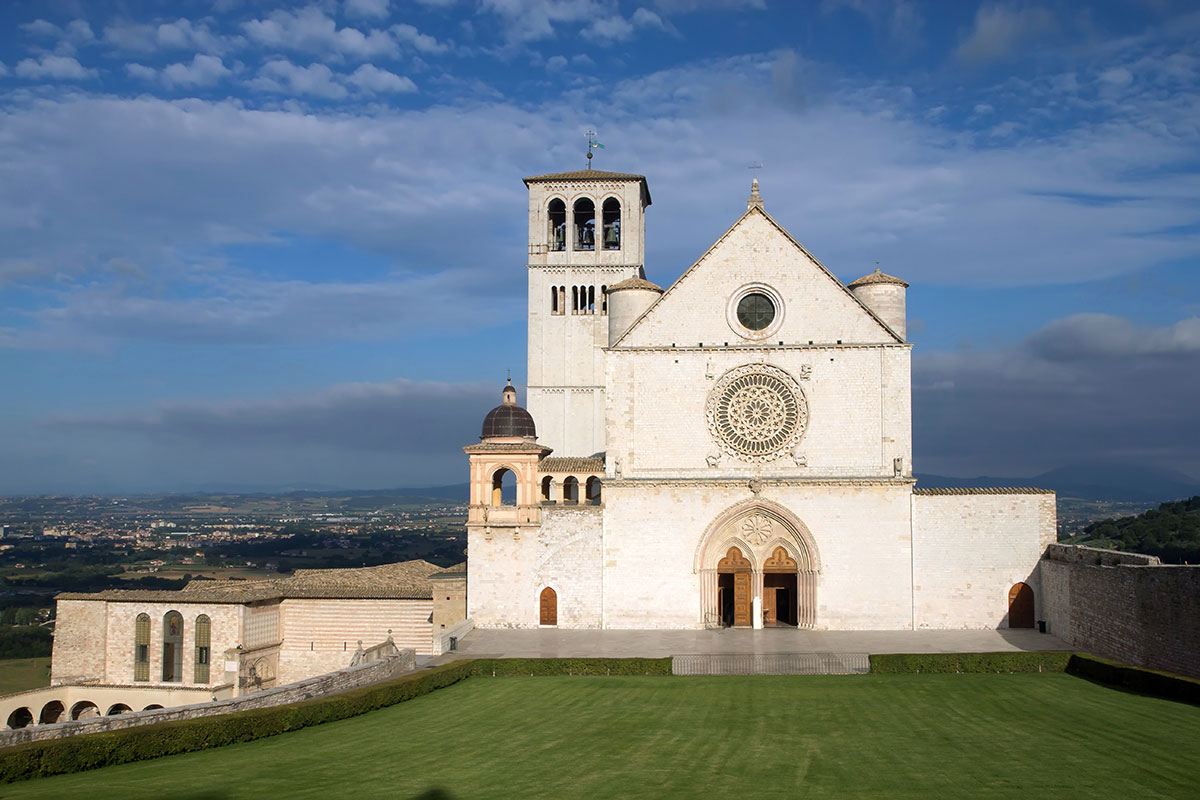 The upper church has a simple ‘hut-like’ façade. The upper part is decorated with a central rosette, with the symbols of the Evangelists in relief on the sides. The lower part is embellished with the imposing splayed portal.

The architecture inside instead shows typical Italian Gothic art features: lancet arches crossing the nave and resting on clustered pilaster strips. This is where the ribbing of the ogival cross vaults and large side arches framing the windows start. The lower strip is instead smooth and right from the start it was designed to create a bible for the poor, represented by the didactic decorative frescos.

Almost at the end of the works to build the upper church, the fresco decorations, designed with a view of a complete decorative plan to highlight the figure of St. Francis. The extraordinary final result was achieved with the essential contribution of master artists like Cimabue and Giotto, whose experimentations turned the basilica of Assisi into one of the most important places for the evolution of Italian and European art between the 13th and 14th century.

The upper basilica is used for official liturgical services, as shown by the presence of the papal throne in the apse.

The Basilica of St. Francis in Assisi is the place that, since 1230, has retained and preserved the mortal remains of the seraphic saint. Requested by Pope Gregory IX as a specialis ecclesia (Latin for ‘special church’, it was bestowed by the Pope himself with the title of Caput et Mater of the Minorite Order and at the same time given to the friars themselves for perpetuity.

In the complex history that punctuated the evolution of the Order, the basilica (and annexed Sacro Convento) has always been looked after by the so-called “Friars of the Community”, the group that would then form the Order of the Friars Minor Conventual.

In 1754, Benedict XIV promoted it to Patriarchal Basilica (now “Papal”) and papal Chapel. In 2000, together with the other local Franciscan sites, the basilica became a UNESCO World Heritage Site.

According to tradition, Francis himself indicated the place where he wanted to be buried. This is the lower hill of the town, where the “outlaws”, the convicts were usually buried (maybe this is also why it was called ‘Collis inferni’). That hill, donated by Simone di Pucciarello, was renamed ‘Collis paradisi’ and this is where the new basilica was erected, on the north-west side of the walled town.

The basilica consists of two churches, one on top of the other, and connected by two different building stages: the first one associated with Umbrian Romanesque art from Lombardy, while the second has a French origin. In both bases, the decorations inside are extraordinary.