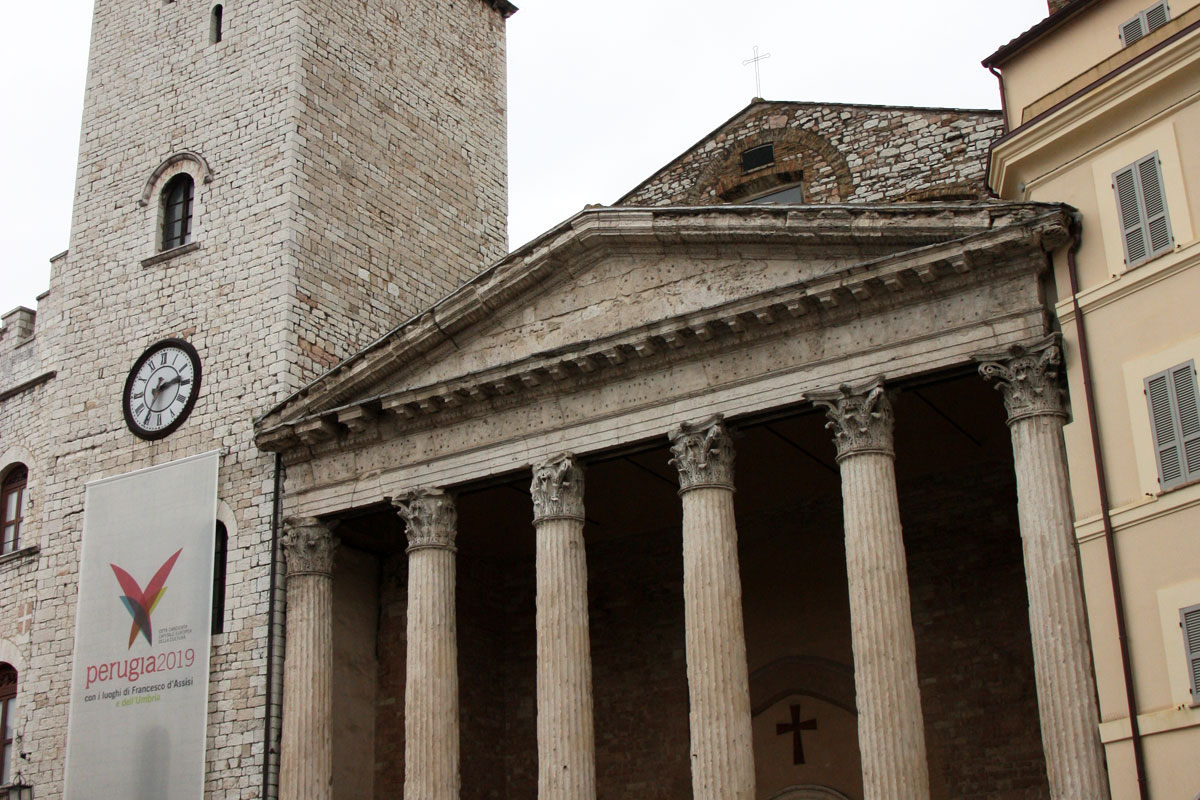 The church is called “Santa Maria sopra Minerva” because it uses the old Roman temple dedicated to the god Minerva, queen of wisdom and peace during the pagan era. The six wonderful Corinthian columns and the whole façade are still intact after more than 2000 years.

In an undefined time, though probably in the second half of 500 AD, the Benedictine monks restored the Temple and used it by dividing the cell into two floors to make rooms to live in at the top and the church of San Donato at the bottom.

With an act dated 24 May 2012, the Benedictines granted the rental for one hundred years (which can be extended for other 100-year periods) of all the rooms of the Temple to the newly formed Municipality of Assisi. This was created in 1198 and started operating especially after the peace agreement with Perugia in 1210. They reserved the rooms on the upper part of the pronaos to live in.

In 1539, while visiting Assisi, Pope Paul III ordered the full restoration of the Temple of Minerva and decided to dedicate it to Our Lady, the queen of true wisdom. The Temple is called “Santa Maria sopra Minerva”.

With a statement dated 5 April 1613, the bishop of Assisi Marcello Crescenzi, also after obtaining the consensus of the town’s Municipality, gives the Temple to the Friars of the Third Regular Order of St. Francis to better ensure the liturgical service.

On 8th May 1758, the members of the Third Regular Order leave the Temple to the Congregation of the Oratory of St. Philip Neri, as they had built the new Friary of St.Anthony of Padua with the annexed church.

With a deed dated 14 April 1918, after a break lasting 160 years, the Church of S. Maria sopra Minerva was again given to the Friars of the Third Regular Order of St. Francis, which still serve it with their faith and care. The big altar at the centre symbolises Christ, around whom the Christian community is gathered.