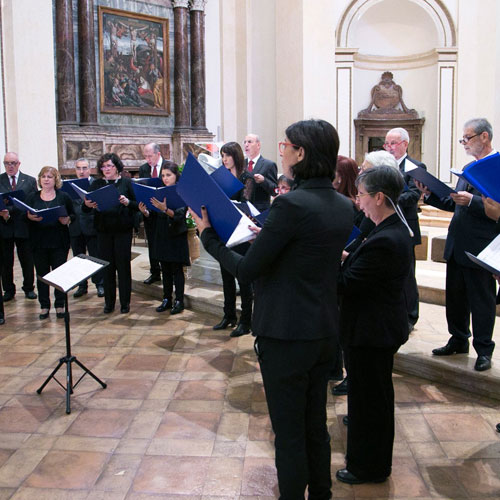 The Polyphonic Choir “San Francesco d’Assisi”, directed by Ghigho Garau, was born on January 1996 as the liturgical choir of the Capuchin’s Church of Sassari thanks to the initiative of Father Alberto Polo. On January 1999 the direction has been assigned to Master Ciro Cau: with him the choir started its new concert activity on January 2000. They improved and refined this vocation with various concerts and participation to important choral festivals.

Its repertoire favours sacred music, starting from the  medieval monody to the Renaissance and baroque polyphony (It is important to remember the Sacred Songs BWV 33, 61, 118 and 153byi J.S. Bach and BuxWV 38, 52, 60, 68 by D. Buxtehudel,the Magnificat RV 611 and the Gloria RV 589 by A. Vivaldi, the Te Deum KV 141 abd the Missa KV 259 by W.A. Mozart), but it doesn’t miss pieces created by romantic composers and songs inspired by profane and folk tradition.

In 2017 the Choir took part in the “Sassari in coro” Festival promoted by the “L. Canepa” Conservatory in Sassary.

Ciro Cau: he was born on 1970 in Sassari, he studied choral music and choral direction at the Conservatory of his own city. He graduated top of his class and he improved his formation following workshops and stages lead by famous masters.

He has been carrying on his concert activity for 25 years by directing different choral formations and performing a music that range from the medieval one to the contemporary one.

He is also a great composer and we can remember among its pieces: the Christmas Song “Puer natus est nobis” (2004), some pieces made for the music fair “Sana sana” composed on commission by the A.Ge of Sassari (it had been published by J. Webber editor on 2007), and a song for the “Invitatorio” Vocal Ensemble that had been mentioned duringt the first National Contest of Choral Composition “Nella città dei gremi”.

He has been teacher of preparatory music and choral laboratories at different primary schools and of music education at Sassari’s middle schools. He is also teacher of Music Theory and Solfeggio at the music schools in Oristano and Macomer.

Now, he is the artistic director of the Polyphonic Choir “San Francesco d’Assisi” of Sassari, of the Coro Ittireddu and of the Sinestesia Vocal Ensemble.