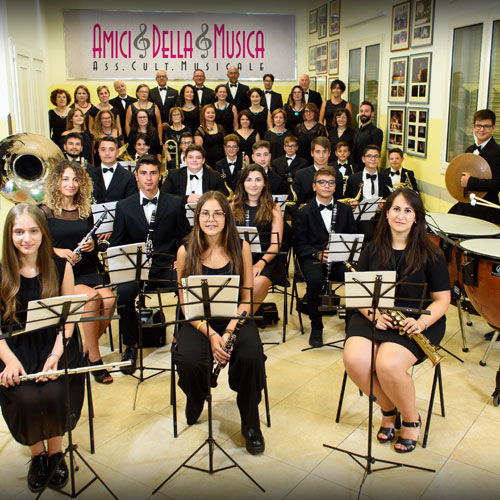 The Polyphonic Choir Amici della Musica was founded in 2001 on the initiative of the President Vincenzo Aluisi who entrusted the management to Maestro Francesco Faiulo. He perfected a varied repertoire performing in concerts in Italy and in Marcinelle (Belgium) for the commemoration of the miners who died in 1956, accompanied by the wind orchestra Concerto Musicale Città di Aradeo. Participated in the International Competition La Vallonea and at the 3rd International Mediterranean Competition of S.M. di Leuca winning the Absolute First Prize. Participation in the transmission on the Italian channel Rete 4 “La domenica del Villaggio” and began the festival of Christmas carols that takes place each year followed by six traveling concerts in Salento.

In 2004, the management was entrusted to M ° Giuseppina Zangari. She perfected a vast repertoire ranging from sacred music to classical music with many concerts. In Bari, together with other choirs, she led Holy Mass with His Holiness XVI for the XXIV National Eucharistic Congress and participated in the Conference on Sacred and Liturgical Music with the speakers: Mr. Falco, Msgr Parisi and Msgr. Liberto.

Organizing the traditional Christmas feast with concerts in Salento and outside the region: in Miranda (IS), in Rome, in Mammola (RC) and produces the festival “Canti della Passione” which later flees mounted in theatrical play. In 2008, in the presence of his Holiness Benedict XVI, the choir “Amici della Musica” and 8 other choirs of Puglia, animated the Holy Mass with songs directed by Bishop Antonio Parisi and participated in the Oratory « Oratorio Pescatore di Uomini «  Directed by Mons. Marco Frisina. Creation of the musical “La Buona Novella” by Fabrizio De Andrè, with the orchestra “Amici della Musica” directed by Maestro Daniele De Pascali with several performances.

Experimented variety music with a tribute to Lucio Battisti with a Cover Band of young musicians.

Since 2011 the management has been entrusted to Maestro Corrado Musio, so the concerts for the 150th Anniversary of the Unification of Italy and the Musica & Risorgimento concert with the Provincial Symphony Orchestra T.Schipa are prepared.

Produces the festival « I canti Mariani » and the new exhibition of Christmas carols. Perform a concert with classics dedicated to the bicentenary of the birth of G. Verdi. For the 15th Anniversary of the Association presents the new production « I Valzer nell’Operetta” with a string orchestra. The Christmas Concerts crowned the year 2015. Prepared a tribute to Fabrizio De Andrè in collaboration of the Creuza de Ma Group.

From 2017, the direction is entrusted to the maestro Danilo Cacciatore, a musician graduated in Choir Direction, who prepared the choir for the “Festa della Repubblica » and the concert for the « Festa della Musica » music festival, Presenting the” Missa Brixinensis » with the Wind Orchestra. He then continued with the traditional Christmas concerts in Salento and in Castellaneta guests of Friars Minor.

In 2018, the concert “Festival of Music” with “Canti Sacri” sacred song and the production “Laudes Creaturam” by M ° L.Melissano, a score for choir 4 voices and Wind orchestra.