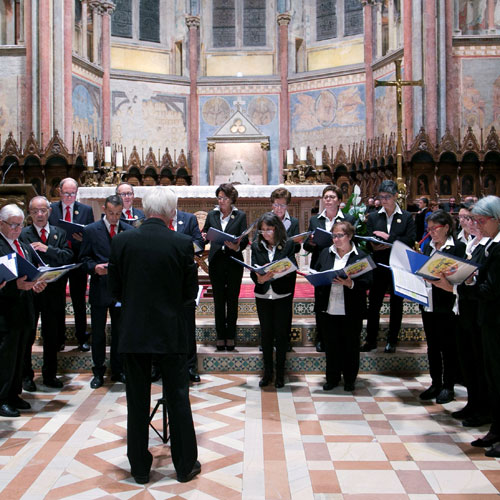 The choir “Monte Colmenacco” of Nesso was established on April 6, 1991 by a group of friends, passionate about folk and mountain songs, and it is named after one of the mountains of the country. The choir was founded with the specific intent to encourage friendship and joyfulness among its members, using folk and mountain songs as tool that unites people and instills a sense of serenity and genuine feelings to the listener.

In March 2001, on the occasion of the 10th anniversary of the foundation, at the thirteenth-century church of S. Maria di Vico in Nesso, the choir Monte Colmenacco recorded its first CD. The second CD, recorded in 2007, contains new songs about places and ancient crafts in the area of Como. The choir has participated in numerous exhibitions and singing competitions both in Italy and abroad, receiving praise and recognition. The most important are following: Choral Reviews in the Province of Como-Lecco, Choral festival in Fischenthal (Zurich), Opening of the office of the association “Pianzola – Sallowthorns” in Cilavegna-Vigevano, International Congress of Technicians for new machine tools at Villa Erba in Cernobbio, Congress of the Italian Physical Society at Villa Olmo, Como in the Centenary of the Company, the 90th Anniversary Celebration of the Italian Colony in Lucerne, International choral festival in Wolfsberg (Austria), during an event of the Mountain Community of the Province of Como at the Como Social Theater, the 19th National Competition of Choirs in Ivrea, “The Alta Pusteria International Choir Festival ” in Val Pusteria. On 10 and 11 April 2016 the choir celebrated its 25th anniversary with the participation of friends from the choir Abete Rosso from Bedollo, Trentino. The conductor of the choir is maestro Moreno Pertusini.