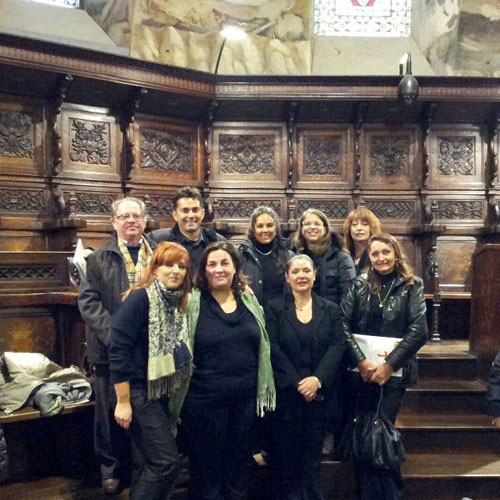 The “Laudate e Benedicite” (Praise and Bless) liturgical choir was founded in 1998 under the stimulus of Fr. Marco Ardu, Librarian of the Friary of the Friars Minor Conventuals of St. Mary of Bethlehem, and of Jana Bitti, flautist and choir director who from the start took on the task of teaching singing to a group of people, with special attention to Gregorian chant. Immediately the Liturgical Choir represented for the Church of St. Mary of Bethlehem of Sassari, not only ministry promotion, but an important sector of cultural promotion as well, grabbing the attention of the city for the initiatives they proposed.

Every Sunday the choir has animated the 10 o’clock Mass, since 5 December 1999, as well as the most important celebrations of the Liturgical Year (Christmas, Easter, the Feast of the Candelieri, of St. Francis, the Immaculate Conception, the Thirteen days of St. Anthony, the liturgical celebrations for “I Candelieri” (now inserted in the Intangible Heritage of Unesco) and the Mass of the Assumption, within the Sassari Ferragosto, the celebrations of St. Francis with the performance of the “Canticle of the Creatures”.

In recent years the Choir has intensified its activities by promoting several presentations throughout Sardinia: Sacred Representations such as the Seven words of our Lord Jesus Christ on the Cross have been executed since 2001. In 2012, an instrumental and vocal combination was proposed at the Sassari University: The Seven Words of Christ on the Cross by Pietro Allori, alternated by instrumental pieces of the work, The Last Seven Words of Christ on the Cross by J. F. Haydn. Since 2005, the choir has sung in the most important Franciscan churches in Italy. In July 2011, the choir animated the liturgy and promoted concerts in the most prestigious churches of Krakow and in the Sanctuary of the Black Madonna of Częstochowa. For several years now, the Choir has been studying Franciscan pieces in depth of both national composers and others linked with the church of St. Mary of Bethlehem, for which many local authors have written and of which there is documentation in the Musical Library of the same Church from 1600 to today. In this optic, some polyphonic scores of Holy Week Responsorials with four mixed voices were studied. Ever since the Choir was founded, it has been dedicated to the execution of scores of Franciscan origin, without neglecting the great polyphonic literature from Gregorian Chant to Medieval Laudes, from Llibre Vermell to Mozart and Listz up until contemporary composers such as Migliavacca, A. Sanna, p. P. Allori, p. B. Rizzi . The 1st and 2nd Meeting and Conference on p. Bernardino Rizzi and on his works were held, with execution of some scores: Missa Dominicalis and Missa Angelica. The convention invited speakers such as Fr. Jerzy Norel OFM Vicar General of the Order, expert in the Polish period of Rizzi and Fr. Giuseppe Magrino, director and maestro of the Chapel Choir of the Papal Basilica of St. Francis.

The Choir has belonged to the Association of Choirs of Sardinia “Benedictus” since 2009, founded while His Holiness Benedict XVI visited Cagliari for the centenary of N.S. di Bonaria.